I’ve written a one-page mod for Warcry! Check it out:

The supplement tries to address a particular criticism of Warcry I keep seeing. On the one hand, the way attacking works is one of the game’s best features: it’s simple and fast, with just enough variables to create some verisimilitude. On the other hand, without a save roll you don’t get the chance to do anything to mitigate incoming damage. That can feel bad.

To fix this, my supplement gives all fighters the ability to react to attacks by attempting to dodge them or deflect them, reducing the amount of damage done. Neither reaction is free - a fighter spends one of their actions when it reacts, and can only react once per round.

Dodge halves the number of attack dice and, if all damage is successfully avoided, lets the dodger make a short move away from the attacker. But you can’t dodge if you don’t have enough space.

Defend reduces the attacker’s damage characteristic by 1. So maybe less good, but you don’t need space to do it.

I haven’t had a chance to thoroughly playtest these rules, I’m afraid. COVID is kicking our butts here in Scotland, so regular gaming is still a thing of the past. But probably I can persuade Nat to play a few games with me, and we’ll see if the mod really does what it should. 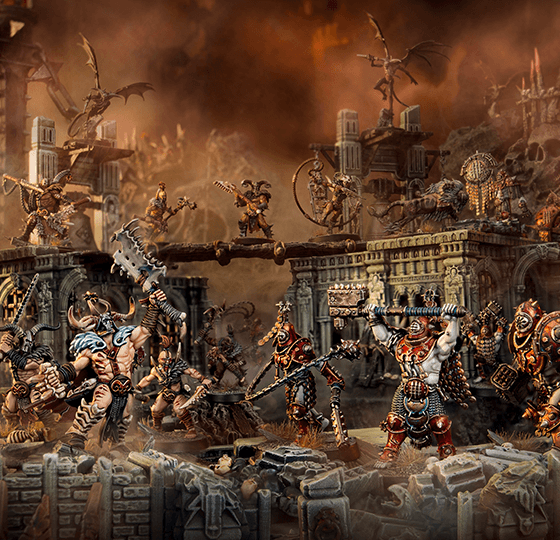 Yesterday we got back to Edinburgh after a week away in a self-catering holiday house in Dunbeg, near Oban. We walked about, we cycled, we ate well and in the time in between I played a lot of Morrowind on my laptop. A cracking week off. Let me tell you about it.

Having given a suitcase full of our things to my mum on Thursday evening, Friday morning saw Natalie and I cycling to Waverley, taking our bikes with us to Queen Street.

This was the first train either of us had been in since February, so a pretty weird experience, and a nervewracking one. In all 4 of the trains we were on this holiday it didn’t feel like people were able to sit far enough apart the whole time to be properly safe, and there were too many people not wearing their masks1, or not wearing them properly2. So I doubt I’ll be risking a train journey again until it’s much safer, but it was the only way we could bring our bikes. 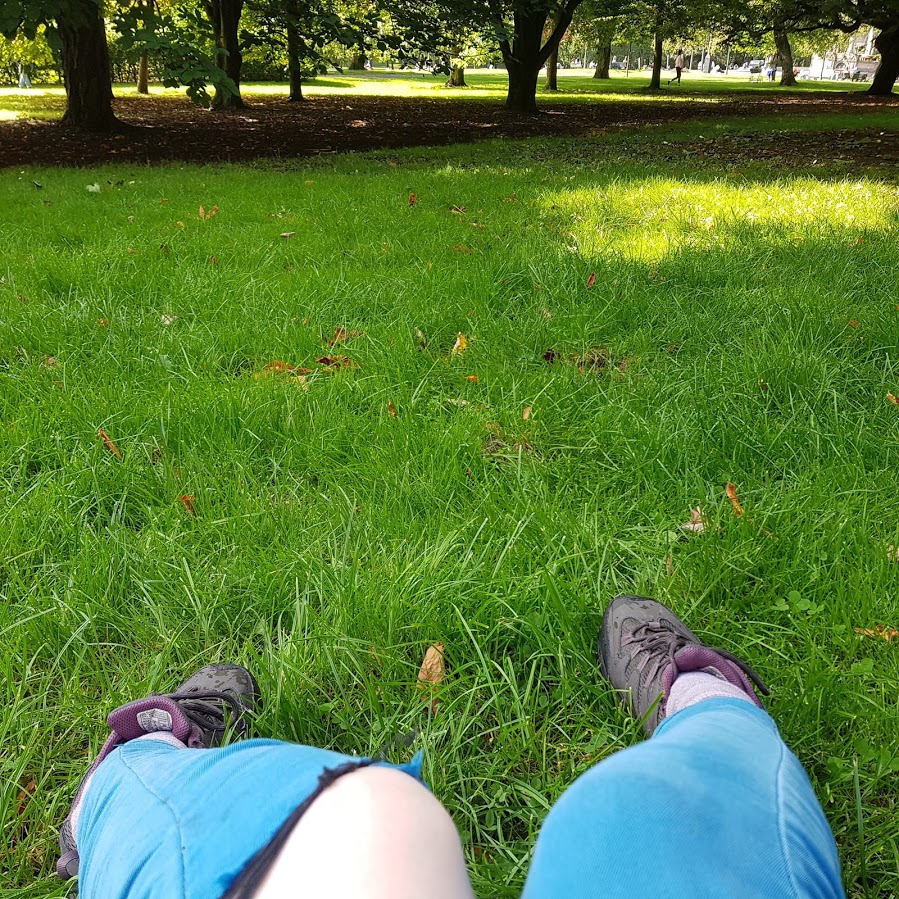 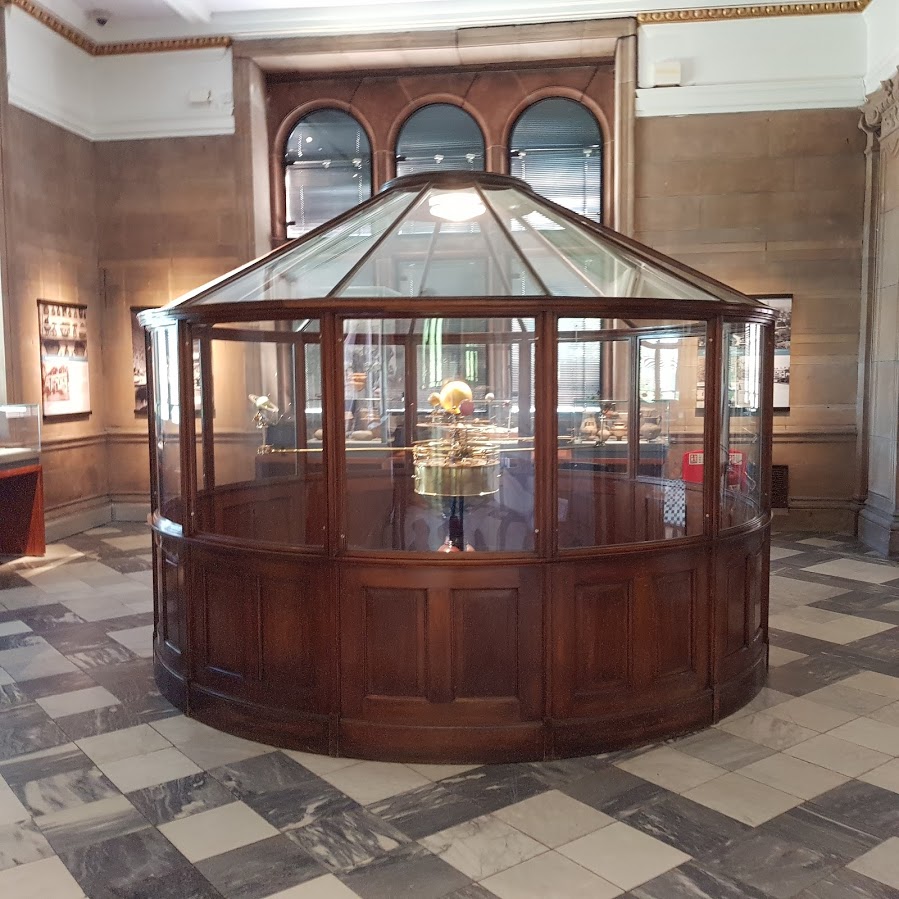 At GQS we discovered that our bike reservation was invalid for the train we were planning to get, so we had to make a new reservation for the next train and wait four hours for it. This wasn’t so bad - it was a perfectly sunny day, so we walked across town to Kelvingrove, sat in the sunshine, and had a wee tour of the museum.

Returning to GQS we boarded the train to Oban without a hitch and enjoyed glorious scenery for the duration of the ride, the late-afternoon early-evening sun lighting the highlands.

Arriving in Connell (the last stop before Oban), we checked into our hotel for a one-night stay. We wouldn’t have been able to take our bikes on the day after due to the train being replaced by a bus, so we had to go a day early and stay overnight in a hotel before our main accommodation.

That evening we attempted to enjoy our first meal in a restaurant (the hotel’s) since March. We were partly successful. I just don’t see how indoor dining can really work without good ventilation, which this place didn’t have. It’s an airborne virus, it doesn’t matter how many metres away from the nearest table you are if you’re all breathing the same air.

The next day we biked around the area for a while before we were able to get into the holiday home. We cycled into Oban, where lots of people (so many!) were enjoying the sunshine. We got lunch from a coffee shop and ate by the quayside, watching ferries come and go. 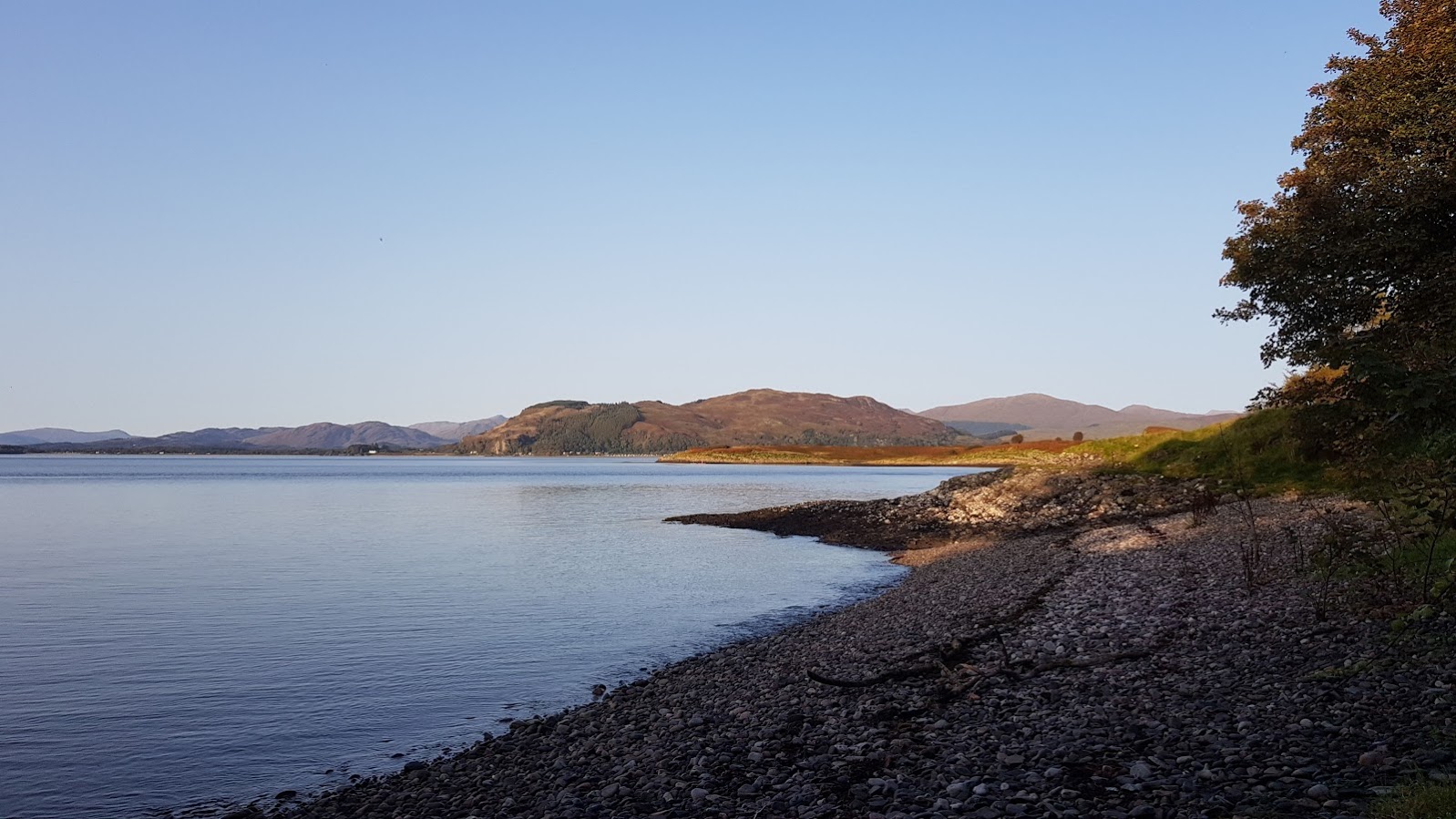 In the mid-afternoon we were allowed into the holiday home so we headed there and waited for my mum and stepdad to arrive in their car.

Dunbeg is a small village just along the road from Oban, next to Dunstaffnage, where there is a marina with pontoons and moorings for yachts. My dad shares a boat with some friends and it tends to live in Dunstaffnage, so I’m quite familiar with the harbour from years of ‘fun’ sailing holidays3.

On the peninsula there is Dunstaffnage Castle, a ruined chapel, and a Marine Biology Centre (for some reason). There is a really smooth cycle path from Dunbeg to Ganaven Beach, which allows you to get to Oban without going on the hellish main road. 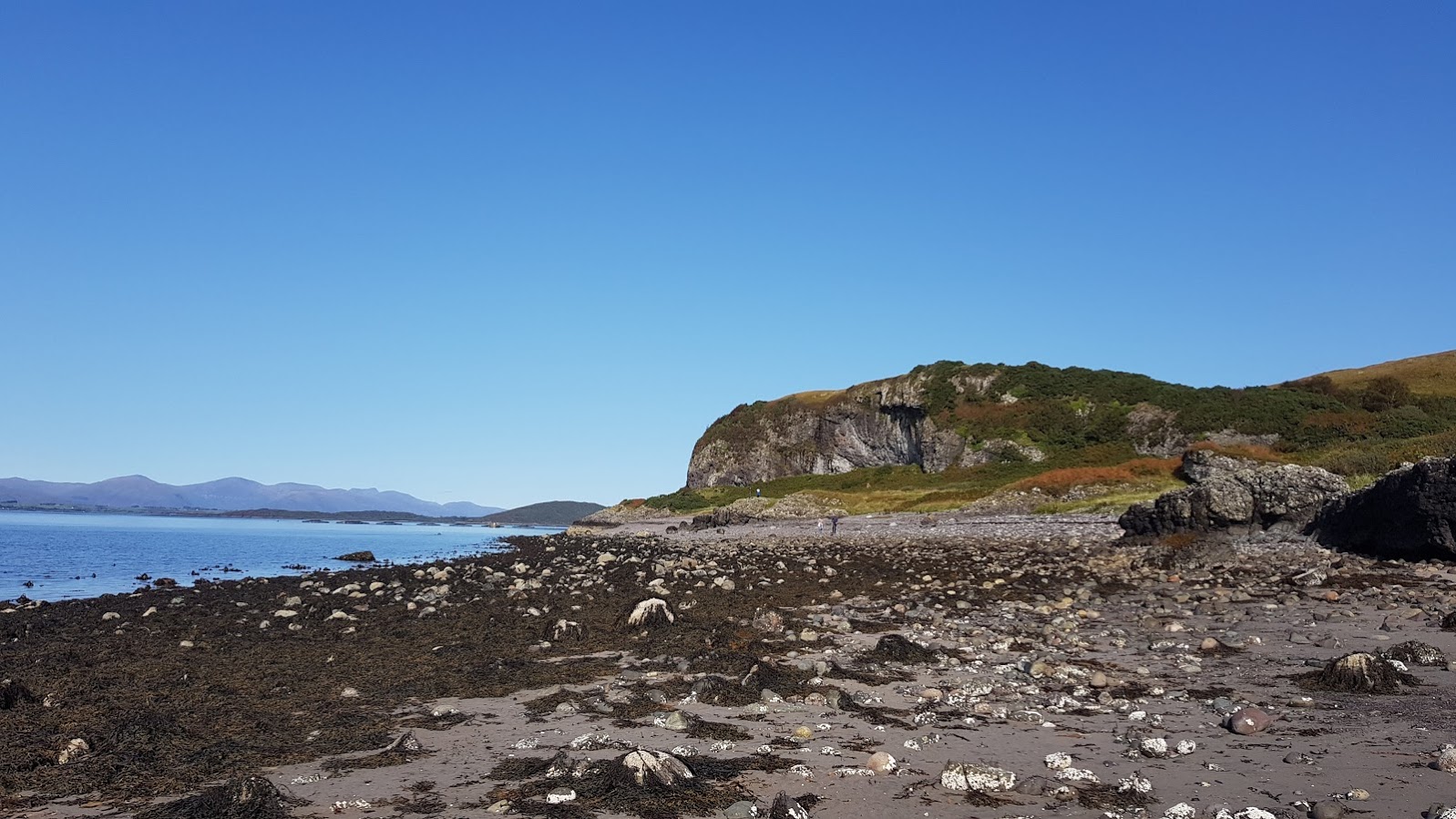 We spent the following week exploring the area on foot and by bike. My parents went on quite ambitious bike rides, but myself and Natalie didn’t join them, being a bit intimidated by the amount of time we’d have to spend sharing roads with feral car drivers. In fact, when we attempted a longer ride, I hit a nasty rock and knackered my front tyre within about 30 minutes and had to push home to Dunbeg. I think I’ll invest in some tougher, wider tyres, as the current ones on my 2nd-hand bicycle are only good for roads and are a bit worn down anyway. I did learn how to fit a new inner tube though – turns out it’s not too difficult.

I also took a bit of a break from being vegetarian. I’m not a particularly pure one anyway, and the local shop had a very paltry offering of vegetables that would have made cooking veggie dinners all week super inconvenient for us all.

In the time indoors I did a bit of writing, mostly working on the rules for a little wargame/RPG thing I’m cooking up, and played a lot of Morrowind. I fucking love Morrowind. Extremely good game. Every time I come back to it I appreciate it more and more. Being away from the painting desk gave me a lot of time to dedicate to my current play-through. 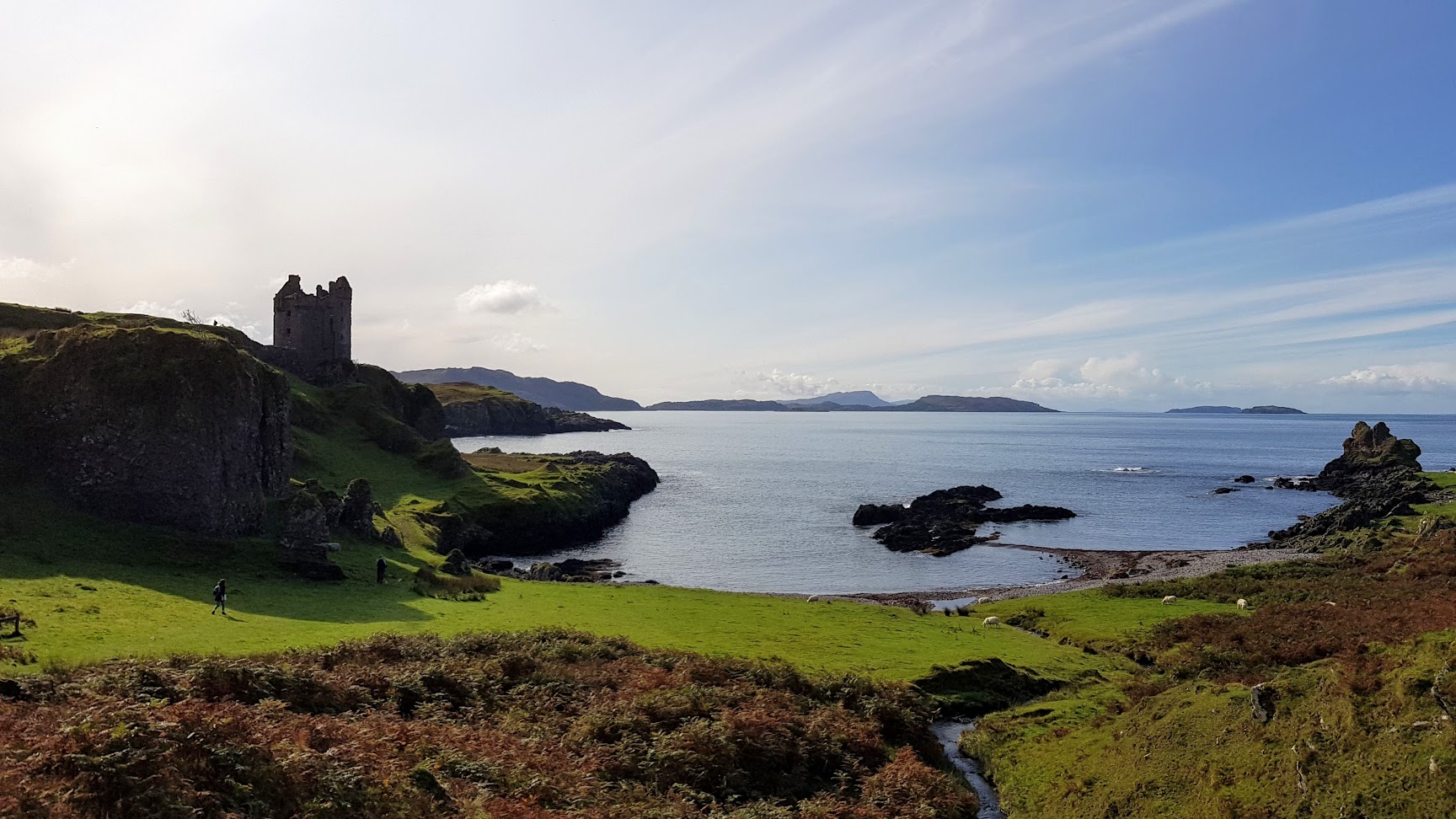 The highlight of the holiday for me was definitely taking the ferry across to Kerrera, a small island that encloses part of the bay of Oban. You can walk around most of it in 4 hours or so, which is what we did, paying a visit to the small but dramatic Gylen Castle (above) and enjoying some perfect weather (no rain, no wind, lots of sun) as we walked.

Near the ferry port one of the island farms has set up a little honesty-policy-shop where you can buy ice cream and other local produce. My mum bought some nice burgers which we ate the following evening.

I definitely recommend visiting Kerrera if you can.

The inbound journey went a lot smoother than the outbound one. Once again I didn’t feel particularly confident about being on a train, especially when a lot of non-mask-wearers boarded on the way into Glasgow, and the Glasgow-Edinburgh train had many more people on it than it should have. Sigh.

But we made it home alright. Time will tell if we got away with taking the risk of travelling by train. 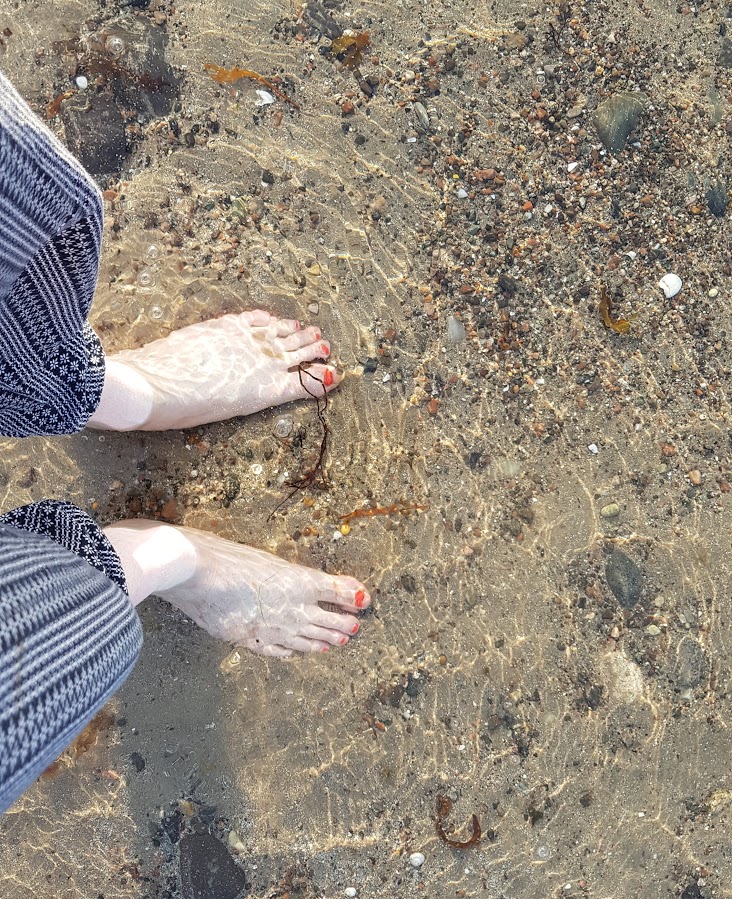 I can’t emphasise enough how good it was to get out of town, away from the flat, for 10 glorious days. To just totally break the routine I’ve been in all year. I also can’t overstate how lucky I feel to have spent some time with my mum and stepdad again, holidaying together (almost) like in the Before Times. It was a risk but after going nearly a year without leaving Edinburgh, and six months with only very timid contact with family members, it was a risk I was willing to take!

Restrictions have tightened up here in Scotland in the last week due to rapidly-increasing case numbers. I don’t think we’d have been able to do what we did if we were just a week later. Summer is coming to an end, Autumn has arrived and is taking its boots off. I’m glad we got away when we did before what is likely to be a long, uncomfortable winter.

If you, like me, have been cooped up in your inner city flat for the past six months, now is probably the time to see if you can grab a few days in a self-catering home somewhere. (Hopefully somewhere that’s easier and safer to get to than Dunbeg.) It will help.

Now then. I’ve not painted any minis for 10 days. It’s time to do something about that! 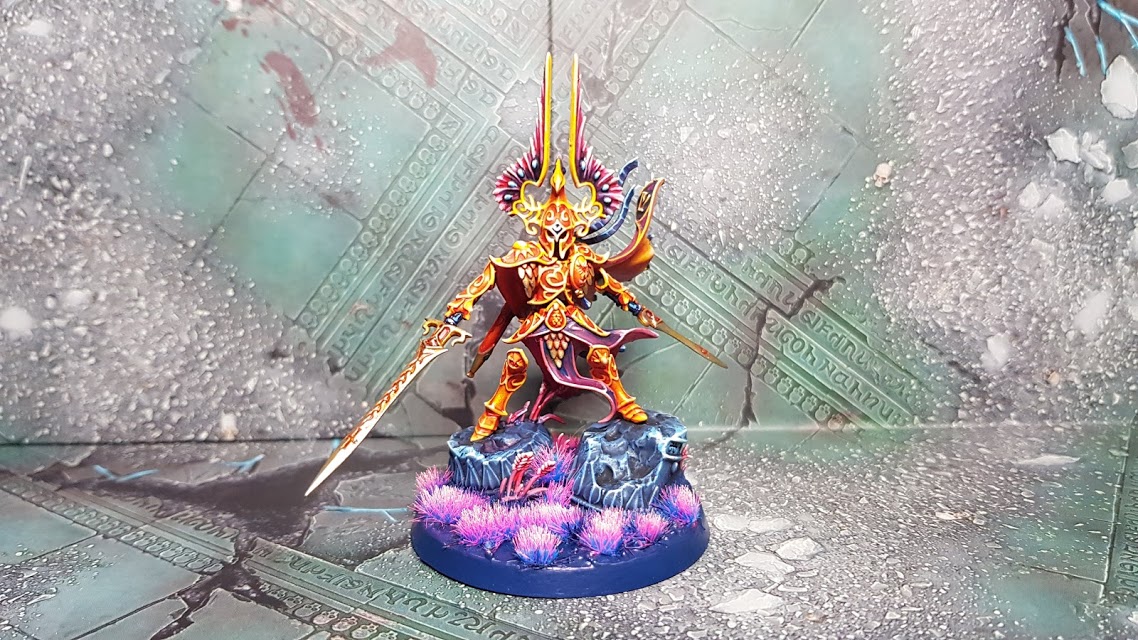 I have a lot of hobby blogging to catch up on. I’m not going to do it all, but I’ll cover some of the big things.

In July, fancying a big treat, I picked up the Lumineth Realm-Lords limited edition launch box. It contained 10 Wardens (spearmen), 5 Dawnriders (cavalry), the Light of Eltharion (a named hero), the battletome and some assorted special tokens and wotsits. 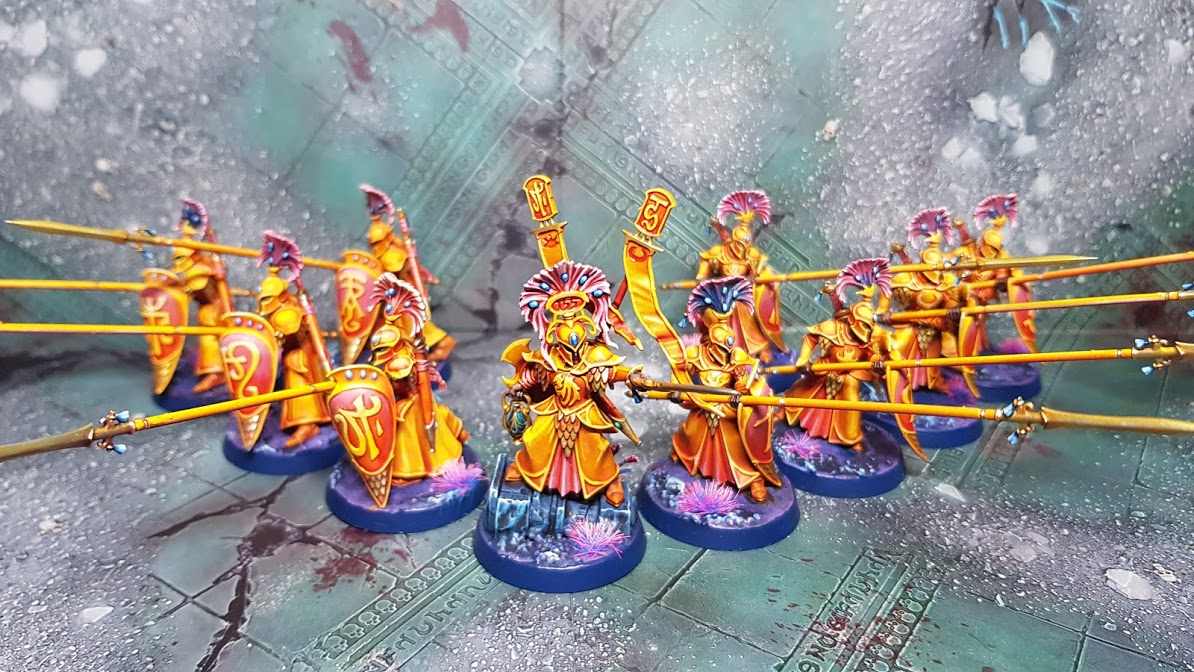 Despite my glowing weak spot for elves of all sorts, I really wasn’t sure I liked the Lumineth model range until a particular colour scheme popped into my head and I needed to try it out. It took a bit of experimentation, but fortunately it turned out quite well! I’m excited to see how it will look on other models and how I can improve it over time. 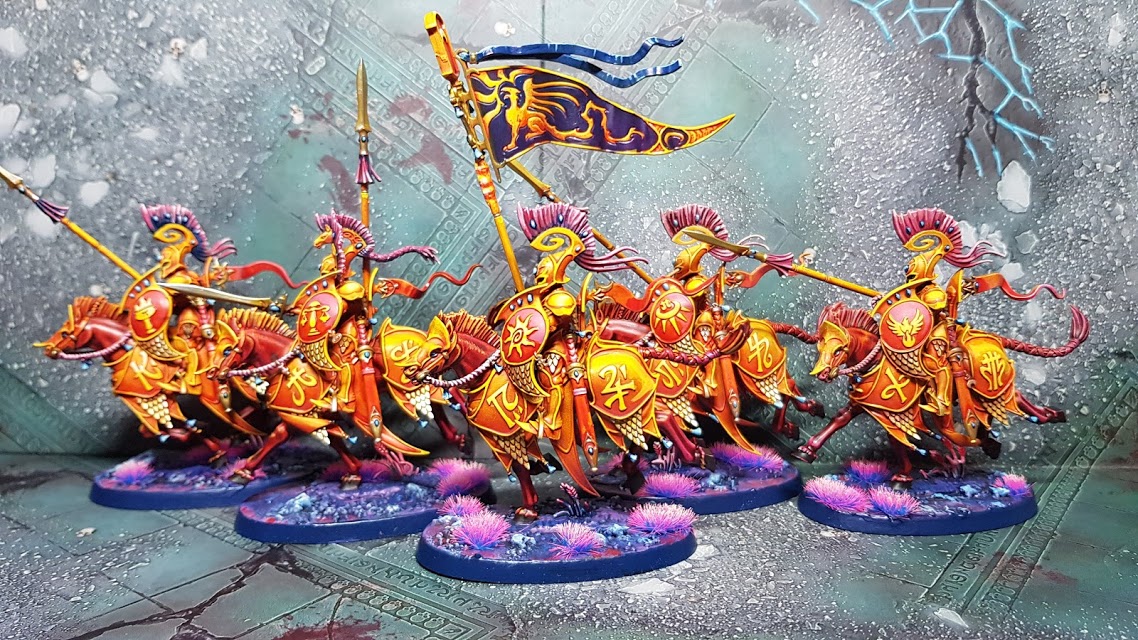 I’m really excited to see Lumineth on the tabletop and what they bring to the Age of Sigmar setting. I want to see the other elemental warriors and spirits, the remaining 4 Great Nations, the other kinds of Scinari.

Having said all that, I’m not in a hurry to pick up any new models. They’re rather pricey and I have too many other things to buy, build and paint already. I can see myself building up this force slowly over time. In the meantime, I might come back to these models and make a few small adjustments. On inspection, there’s some things I missed that I’d like to tidy up.

Recently I painted up 9 of Fireforge Games’ Living Dead Peasants. Me and a friend went half-and-half a box of these that was being sold cheaply by North Star because the packaging was messed up, or something. All I know is I got to build and paint some very high-quality medieval zombies for a very low price. Here they are:

Building them was totally painless. There were no spindly connections or snappable bits, just good solid plastic that takes plastic glue well. They painted up easily with a quick messy zenithal undercoat followed by some splodges of Contrast paint and a wash of Agrax Earthshade over the tattered clothing.

This is a great wee kit and I’m sure they’ll see use in a variety of games. I hope I get to sample some more of Fireforge’s offerings in the future. Perhaps some more of their Living Dead? Or maybe something from the Northern Kingdom range?

(Man, it feels good to be writing a little hobby update again.) 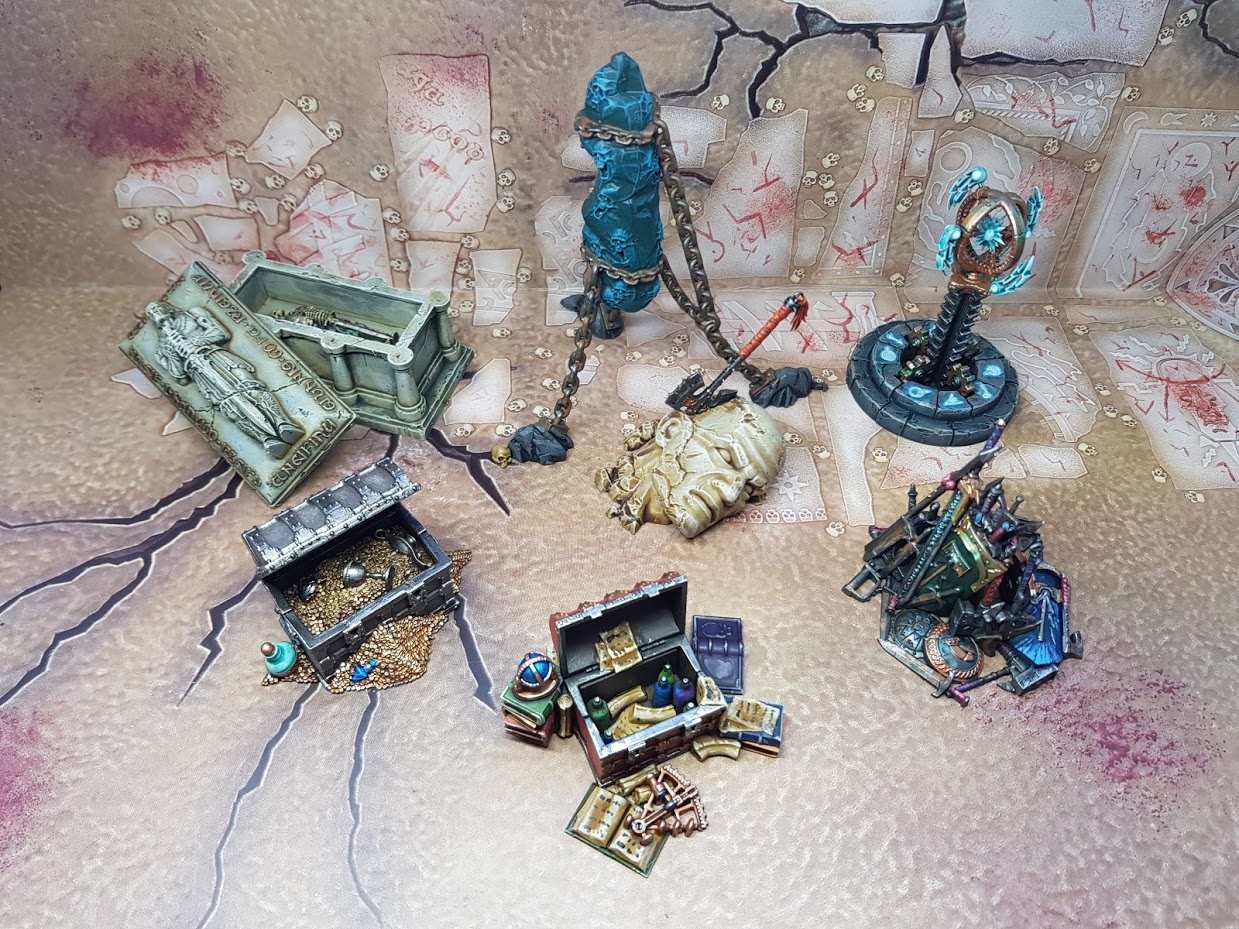 A couple weeks ago I finished painting this lovely little set of objective markers from Games Workshop. They’re all very extra, absolutely bursting with character. Can’t wait to use them in games, even just as bits of scenery. 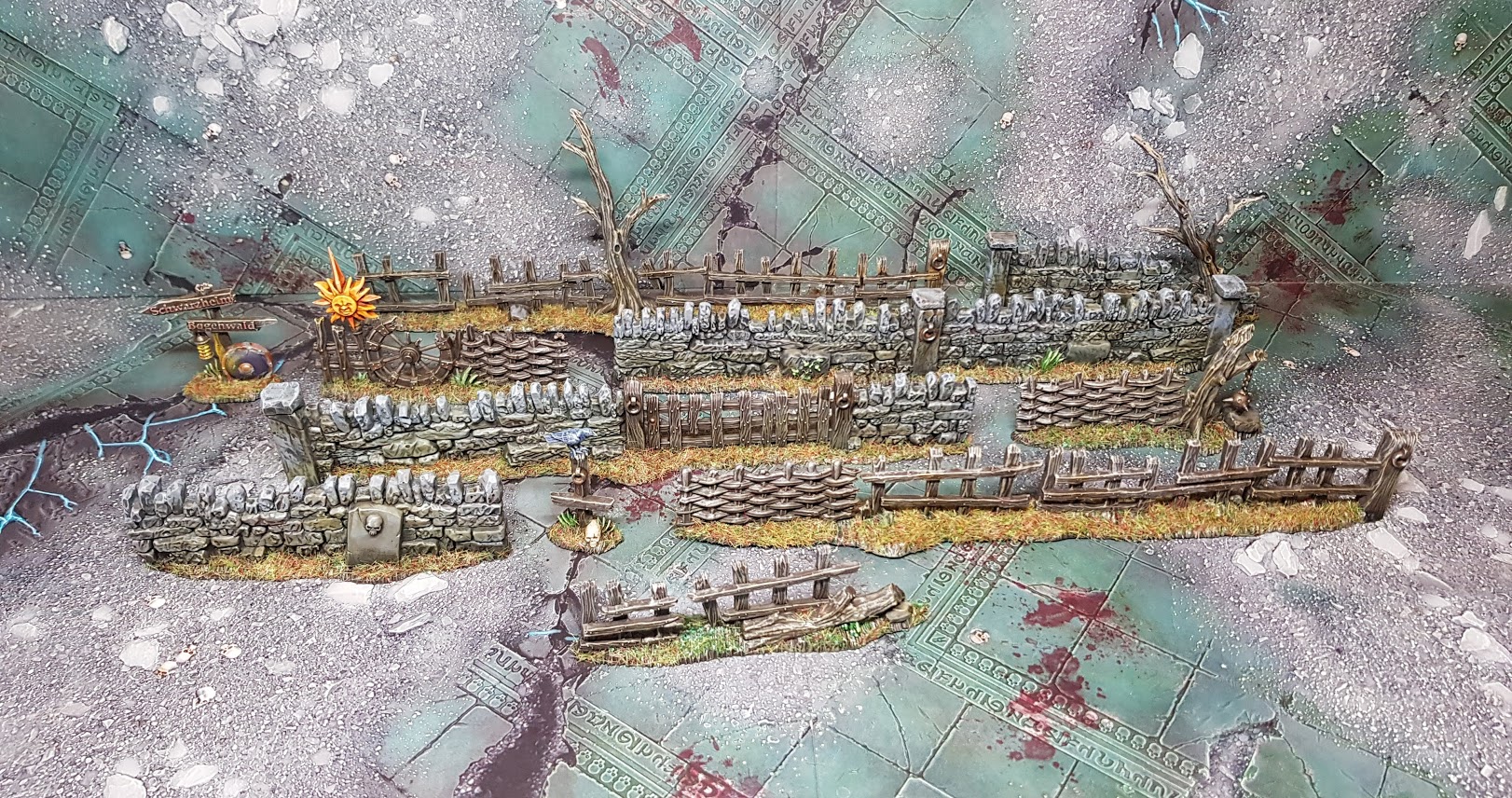 A little further back I painted up a set of the old Walls and Fences kit from back in the Warhammer Fantasy Battles days. I always thought these pieces were friggin adorable and wanted to paint them up. I was lucky to get these free from a friend! I think I’ve done them justice.