Game Developers Conference is an annual gathering of people involved in the game industry from all over the world. It takes place in and around the Moscone Centre in San Francisco, California. I’ve always wanted to go, but it’s expensive to get out there and get accommodation and very expensive for the kind of pass that gets you into lots of interesting talks and events, which is one of the main reasons to go.

Very luckily, and to my great surprise, this year I got to go for free (for reasons I’ll explain). I was in San Francisco from Tuesday 28th February until Sunday 5th March and have spent most of my free time since I got back recovering. Here are some words about my trip. 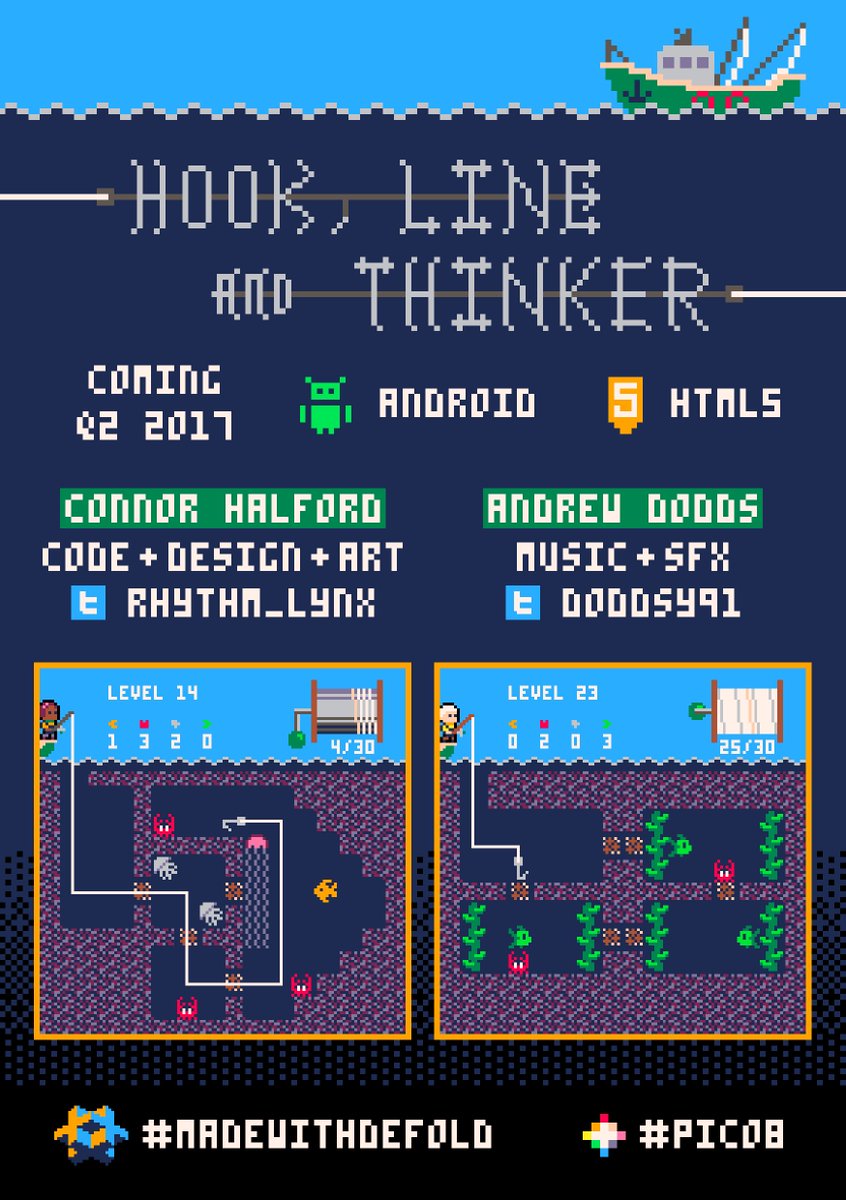 This is a game by my friend Connor that he originally made for Fishing Jam on PICO-8, a fantasy console. He began working on a post-jam version with Andrew helping on the audio side of things.

A game engine developed by King with a focus on 2D, mobile games. I haven’t had a chance to really play around with it yet. They held a competition to encourage people to promote and make games with it, offering as a prize paid-for flights for up to three people to San Francisco, with GDC expo tickets and hotel rooms to boot, and a dedicated booth space for showing off the game they submitted. Connor and Andrew ported Hook, Line and Thinker to Defold and entered the competition. They won, and invited me to come as their third ‘team member’ in early January, just as I was resigning to not getting to go to GDC for another year. I was quite surprised!

Connor had already been in America for a week for TrainJam before myself and Andrew flew out on the Tuesday, and arrived as the first two days of GDC were drawing to a close. The expo part of GDC didn’t open until Wednesday morning.

There was a possibility (which I didn’t investigate) of being able to upgrade my expo pass to one that would let me attend talks if I negotiated with the right people at my company about it. I was right not to waste time doing so, though – we weren’t there for the first two days of the conference, which is when most of the extremely juicy talks are, and between manning the booth, exploring the expo and meeting people there was barely any time to go to talks anyway.

I got to attend two talks. On Thursday morning I attended Ste Curran’s talk on gun violence in games (some of his previous GDC talks are available on the web, and are excellent), and on Friday I attended a brief talk on prototyping (it was okay). 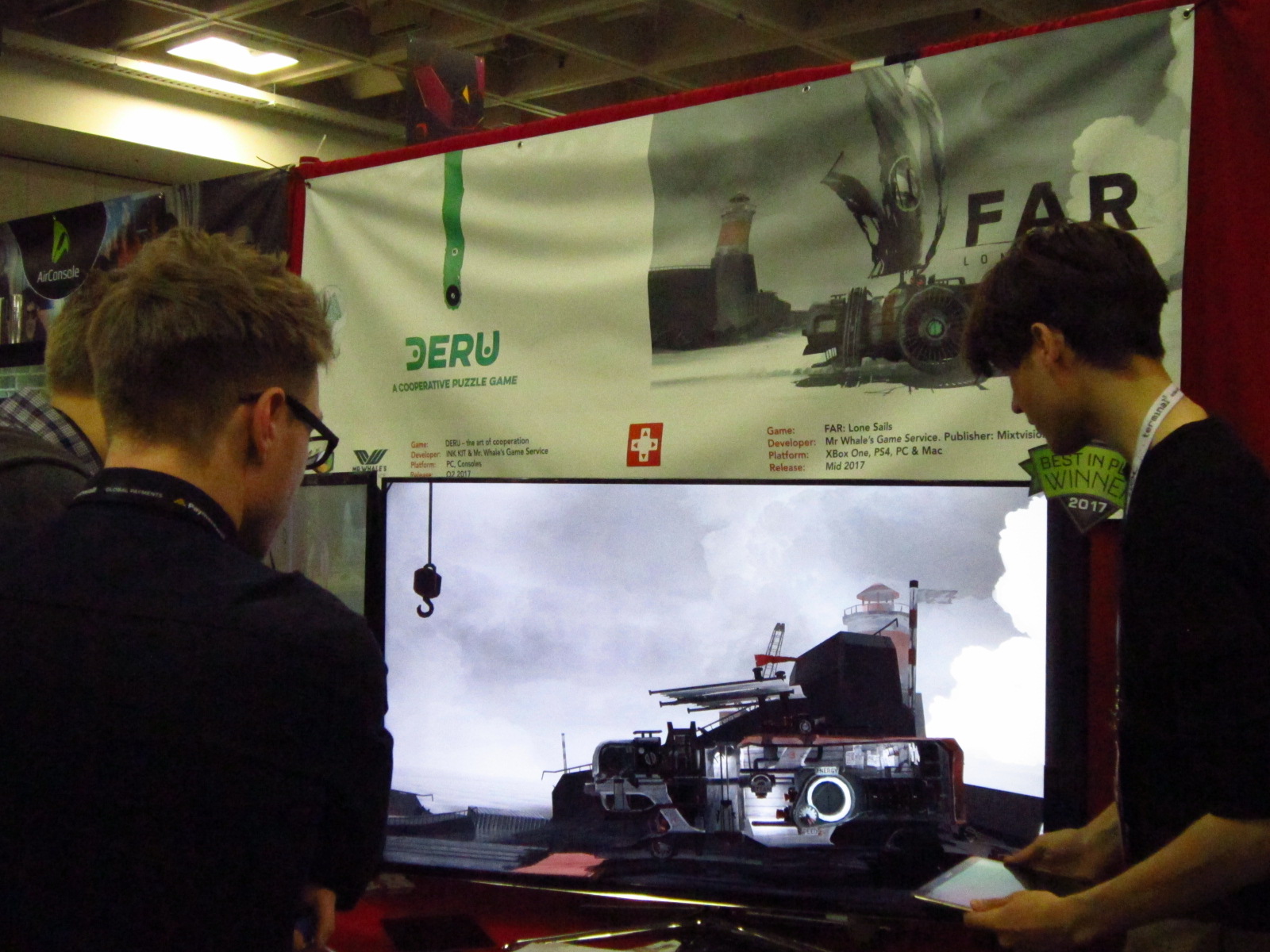 The Moscone Centre consists of three enormous buildings called the North, South and West halls. The West hall was mostly dedicated to talks, containing some pretty cavernous lecture rooms, but had two relaxed areas for videogames (the Indie Megabooth and Mild Rumpus) and a corner for board games run by Shut Up and Sit Down. The South hall was the bigger of the two expo halls, full of big players like Microsoft, Oculus/Facebook and Sony, as well as booths dedicated to national representation like the Scottish booth. The North hall contained all the wee games, the Independent Games Festival finalists, the universities and colleges, and is where we were situated.

The ‘Made with Defold’ booth was in the corner of the hall, but the expo was so busy there was a lot of traffic coming our way anyway. The other games at the booth were cool and the developers of each were all nice people. Almost everyone who played Hook, Line and Thinker enjoyed it, and some played almost every level. Those who had things they didn’t like about it usually offered good constructive feedback.

During the times I got to explore the hall I managed to see a number of interesting games, and play a few. It was pretty cool to get to interact with the developers of games that were IGF finalists at the IGF pavilion, many of whom I look up to and admire for their work. Mostly I just embarrassed myself when I tried to speak to ‘famous’ devs (I imagine it must be pretty exhausting to have people constantly coming up to you and squee-ing about how excited they are to meet you all day). There was also a collection of interesting things in the Alt.Ctrl.GDC section. 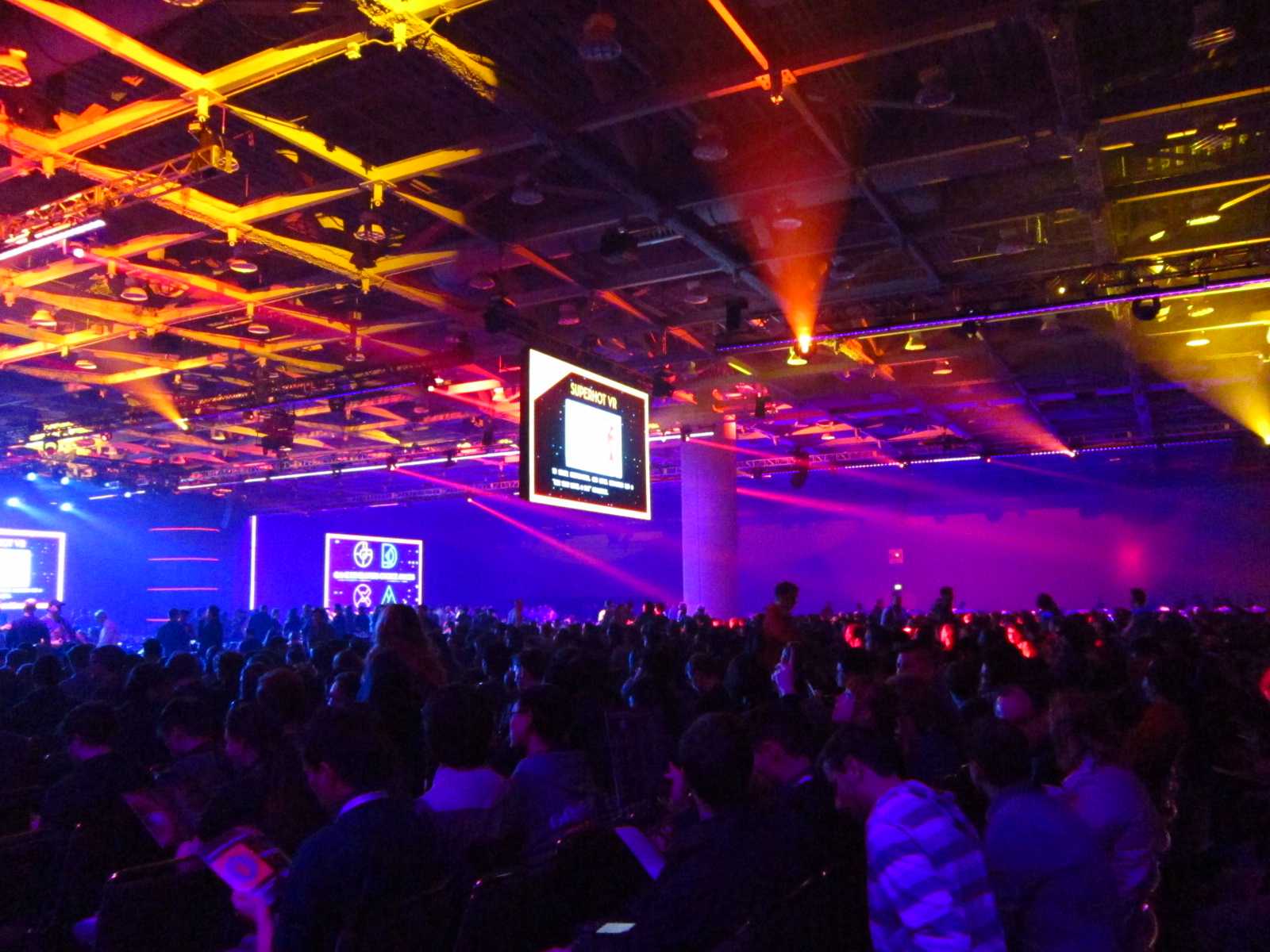 On Wednesday evening me and Connor went to watch the IGF and Game Developer’s Choice awards, a glitzy event where a handful of critically successful games are held up above the rest. I have mixed feelings about awards, award ceremonies and the effects they have, but both the back-to-back shows were highly entertaining. Nina Freeman and Tim Schafer hosted the IGF and Game Developer’s Choice awards respectively; both were good but Schafer’s ability to crack jokes and hold attention is incredible – they’re available to watch online. It was neat to attend in person because there’s a vibe in the room that just doesn’t come across when you’re watching it over a livestream.

There was a good crowd of people I know from the Scottish game dev community wandering about, some who I hadn’t spoken to in a while, and it was good to catch up. More importantly I got to meet a lot of new people. Every night of GDC there are countless parties and get-togethers (I have no idea how anyone has enough energy to survive). On Friday evening I went to the Shut Up and Sit Down after party, learned a new game (Good Cop Bad Cop – an excellent wee hidden roles game) and got to hug Paul Dean.

All in all, a very successful trip. I hope I get to go again!