Phew! January has been a productive month, hobby-wise. After painting a worm, some netters and some spider riders (detailed here), I painted a big ol’ spider: 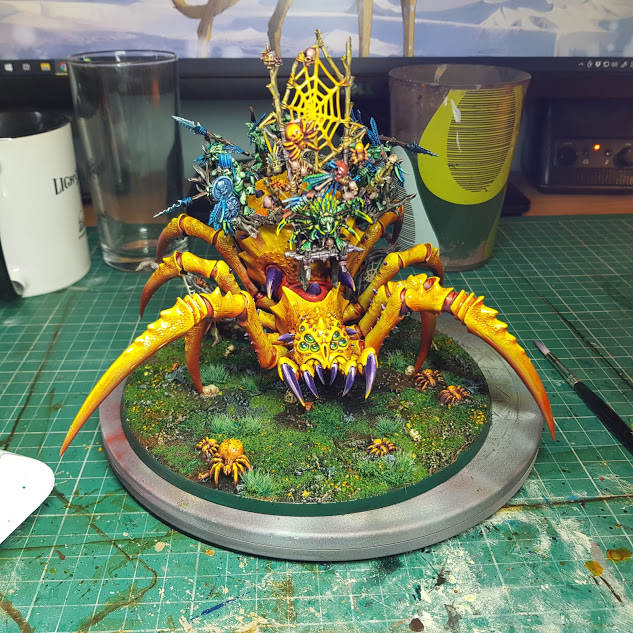 This is my 3rd Arachnarok, and first with a howdah (cool word!) on the back. The howdah, by the way, is detachable - my debut magnetization attempt - so that I can run the spider as another Skitterstrand if I want to. I’m pretty certain I built the whole thing correctly, but I can’t get the howdah to sit straight, so it looks a little wonky. Oh well!

I’m now up to about 1300 points of just Spiderfang goblins.

Following that, I did some Flesh Hounds: 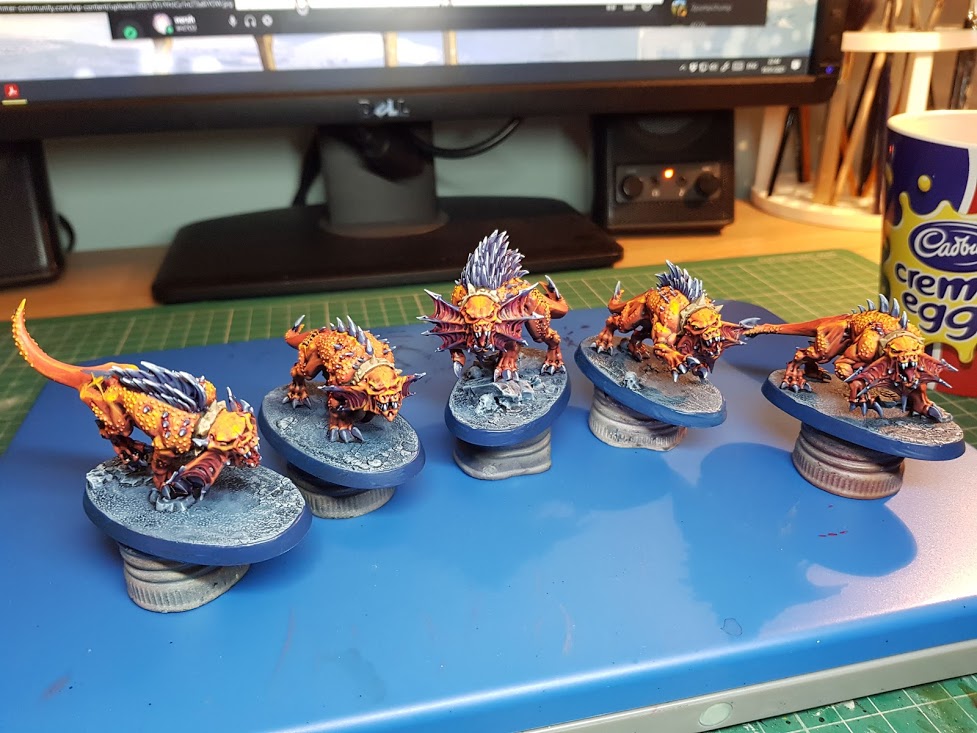 Aren’t they cute? I’m not doing a Blades of Khorne army (although I do have a handful of them from the old starter set) - I’m not even planning a Warcry warband - but I just had to have some Hounds. Iconic and quick to paint.

I painted 30 very old goblins from the 1992 Warhammer Fantasy Battles starter box. They don’t look like Moonclan Grots, so I needed to come up with a lore reason why they fit into my Gloomspite Gitz army:

The sun-scoured steppes that border the Gloomwood are populated by a multitude of Gitmob Grot tribes. Though they are numerous enough to be a constant menace to the Plainstrider peoples who share the region, they are too disunited to stand up to the might of the Moonclan and Spiderfang grots who dwell in the Gloomwood. As a result, they often find themselves drafted into their armies as auxiliaries whenever the Dankroot Dastards march to war - be it against their external enemies or, more commonly, against themselves. Here they fulfil a useful role to their overlords, either as mere extra bodies to bulk out the teeming hordes, or as scouts and advance guard, roving ahead of the main force while the Moonclan gits cower away from the daylight in hidden caves and grottos.

I’m very pleased with how they came out. Some of the shields are from North Star kits, but the rest were designed and 3D-printed by a friend. Thanks, friend!

Sneaking in behind them came 10 last-gen Night Goblins. These models are SO different from the current equivalent, with their huge heads and enormous hands. The ‘Kev Adams’ look. As with the other grots, I discovered that highlighting with yellow is a pretty neat trick. 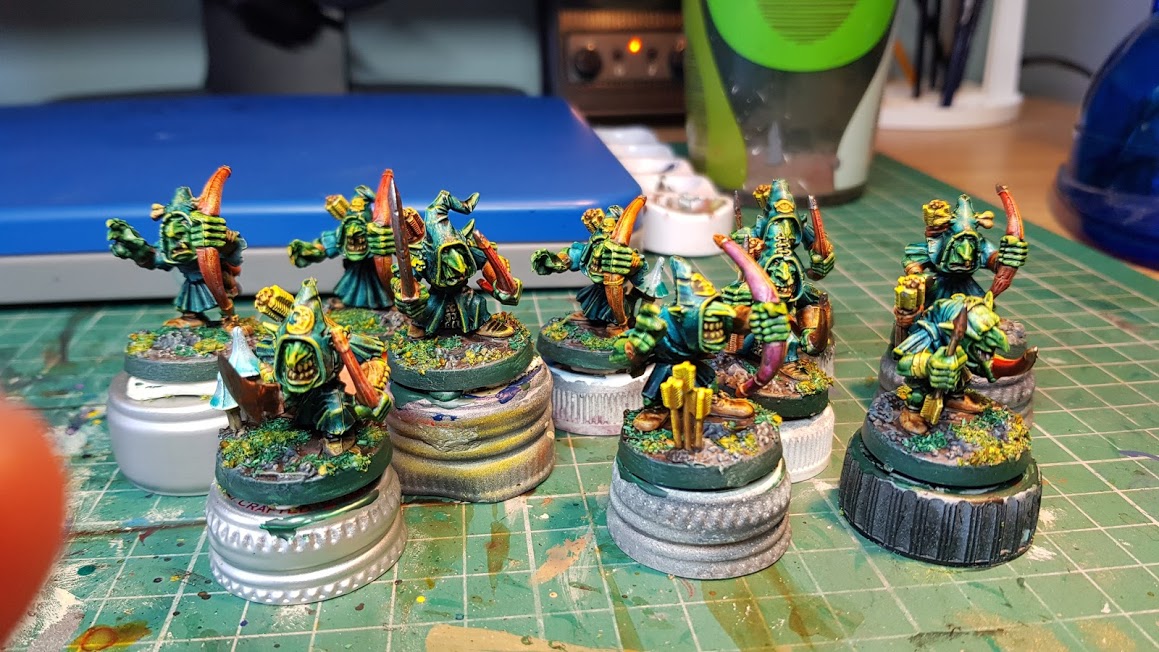 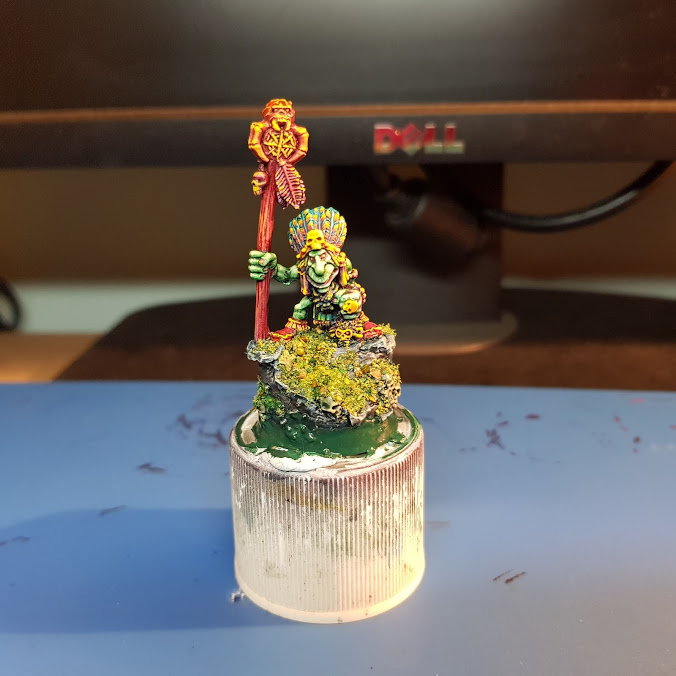 He will be joining my Spiderfang as a Webspinner Shaman. He didn’t get the yellow skin highlights - I like my Spiderfang Grots to be pale and pasty.

I’m planning to spend most of February just getting models ready to paint. All sorts of different models are gonna be stripped, built or fixed, based, and primed by the end of February. This means I probably won’t be showing off a lot of painted models for next month, but it will be a productive one nonetheless. The payoff will be huge: when it’s time for me to paint a particular project, all I will have to do is grab it off the backlog shelf.

I’ve already begun this process and it’s very satisfying to finally give these miniatures a bit of the attention they deserve.